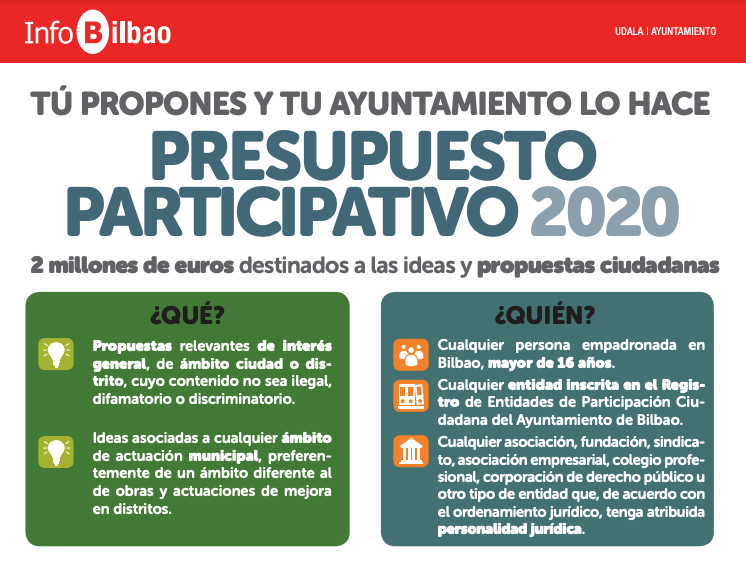 The Participatory Budget of Bilbao is an open process through which the residents of Bilbao can make their proposals on how to use part of the municipal budget. Bilbao City Council allocates the sum of 2 million euros to the proposals received in the open process prior to the preparation of the Draft Municipal Budget.

The Bilbao Participatory Budget is open to:

In the latter 2 cases, the applicant must also be registered in Bilbao and be over 16 years of age.

The participatory budget is a mechanism enshrined in the Participatory Strategy for Bilbao 2015-2019.

Proposals can be submitted through the form provided on the website of Bilbao City Council or by writing to the Municipal Registry and the registers of the Citizen Attention Offices located in the 8 districts, as well as in the other places legally provided for in Article 16.4 of Law 39/2015, of 1 October, on Common Administrative Procedure of Public Administrations.

When making the proposal, in addition to the personal details and, where appropriate, those referring to the entity or group represented, the name of the proposal is requested (brief description, title), the description of the proposal indicating, among other issues, the reasons why it is being presented and its objectives and the approximate cost of the proposal (not compulsory). It is also possible to attach documents.

Relevant proposals of general interest, of city or District scope, whose content is not illegal, defamatory or discriminatory, and associated with any field of action of municipal competence in matters of public expenditure may be submitted. The amount associated with each proposal may not exceed 500,000 euros, i.e. 25% of the total budget allocated to this Participatory Budget.

Proposals may concern all fields that make up the municipal spectrum, but preferably the following:

The process for the presentation of proposals by the residents of Bilbao is divided into 4 stages:

At the end of the deadline for the submission of proposals, a list of all proposals received is published. So that the proposals can be identified, each proposal contains its name and description as well as its application or registration number. Those proposals that have been prioritised up to a maximum of 2 million euros are incorporated into the Preliminary Draft Municipal Budget which, once approved, is published on the municipal website.

Once the budgets are approved, they are published on www.bilbao.eus in the Participatory Budget section. They can be monitored through the budget execution reports that are published periodically on the municipal website.

Sources (in Spanish and Basque):