Ballots were cast by 2,911 ward residents

May 8, 2017. In the eighth annual 49th Ward Participatory Budgeting Election, Chicago’s 49th Ward Alderman Joe Moore asked the residents of his ward to decide directly how to spend $1 million of his $1.3 million capital budget for 2017. The remaining $300,000 will be used to cover cost over runs from last year’s budget and provide a small discretionary pool of funds for emergencies. Over the past six months, 49th Ward residents identified needs, researched projects, and prepared full spending proposals.

Beginning April 21, 2017, with early voting, and culminating in an election held on May 6, 2017, all 49th   Ward residents age 16 and over, regardless of citizenship or voter registration status, were invited to vote on two separate ballot questions. Ballots were cast by 2, 911 ward residents. 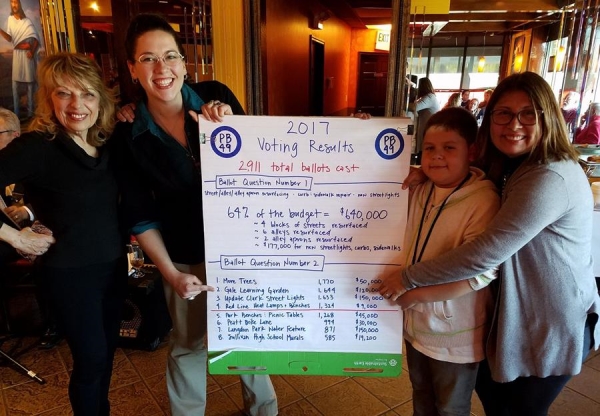 The voters this year decided that 64% of the $1 million allocated for PB should be devoted to street and alley resurfacing, streetlights, and repairs to sidewalks, curbs, gutters and alley aprons. As a result, four blocks of streets and six alleys will be resurfaced and approximately $177,000 will be devoted to new streetlights and repairs to sidewalks, curbs and gutters.

For the remaining portion of the budget, the voters selected the following:

Alderman Moore said: “When I launched the 49th Ward Participatory Budgeting process eight years ago, I had high expectations for our amazing neighborhood.  The 49th Ward has a proud history of civic engagement, and I knew my constituents would embrace this process. But the participatory budgeting elections have exceeded even my wildest dreams.  They are more than elections.  They are community celebrations and an affirmation that people will participate in the civic affairs of their community if given real power to make real decisions. At a time when our governments are failing us in Washington and Springfield, we in Chicago’s 49th Ward have shown the world what true democracy looks like.”

Alderman Moore pledges to submit to the City of Chicago and its sister agencies for implementation the projects that won the most votes, up to $1 million. All the projects listed on the ballot are feasible, but most require final approval from the City of Chicago or its sister agencies. Though Alderman Moore has received tentative approval for the projects from the various City agencies, he cannot guarantee they will grant final approval to each and every project request at the estimated cost.