After two lost decades, Nepalis are finally getting ready to vote in local elections for 481 Village Councils, 246 Municipalities and 17 Metropolitan Cities. In the two-phased elections on 14 May and 14 June, nearly 14 million citizens will be casting their ballots for the first time under the new Constitution, for representatives in new local structures.

Local elections were held in 53 municipalities in February 2006/8/9 under King Gyanendra but were boycotted by the major political parties and saw low voter turnout. Prior to 2006, the previous elections was held in 1997 with a mandate of five years. Elections were supposed to be held on 2002 but were delayed due to the then ongoing Nepal Civil War.

With the promulgation of the new constitution in 2015, a three-tier governance system was introduced, with national, provincial and local levels of governance. A Local Body Restructuring Commission was established as required by the constitution under the chairmanship of Balananda Paudel. The commission proposed 719 local structures which was revised to 744 by the government. The new local levels were formed by changing the existing cities and village development council and came into existence on 10 March 2017. 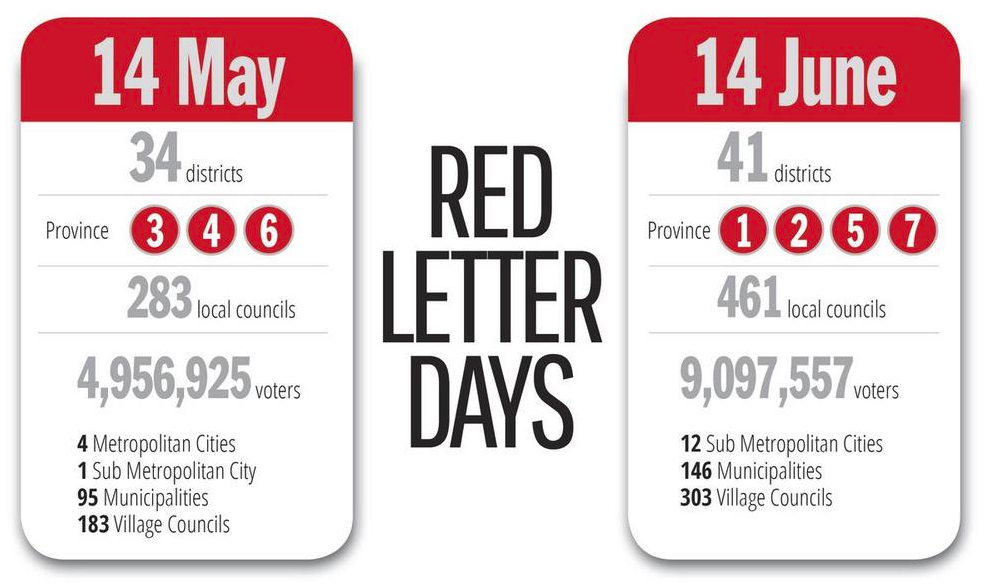 Local levels will have a Chairman/Mayor and a Deputy chairman/mayor. Local levels are further subdivided into wards which will have a ward chairman and 4 members. Out of the 4 members 2 must be female. All terms are for a total of 5 years. The elections are direct in nature and with the one getting the most ballots is declared the winner.

Results from 74 local units across the country have so far been declared in the first phase of Nepal Local Election 2017.

According to reports, the main opposition UML has won 30 Mayor/Chairperson seats while the Nepali Congress has won 25. Similarly, the CPN Maoist Centre has won 17 seats.

The RPP and Naya Shakti are yet to win a seat. Independent candidates have won two seats.

Meanwhile, counting continues in Kathmandu, Lalitpur, Pokhara and Bharatpur Metro cities. The UML has performed strongly in all metro cities, except for Lalitpur where the Nepali Congress maintains a slender lead.