The election of members to local and regional councils must be held every four years according to the Local and Regional Elections Act. Such election is always held on the third Tuesday of November in the year of election.

Any person who has attained the age of 18 years and is resident in the local authority area is eligible to vote in the election to local and regional councils.

However, people who are not nationals of Denmark, another EU Member State, Iceland or Norway may only vote if they have resided in the Kingdom for a period of three years prior to the election.

Furthermore, the following persons are not eligible to vote:

Who Can Stand for Election?

Advance voting can also take place at any Danish diplomatic representation abroad (embassies and consulates) from three months prior to election day, and from three weeks prior to election day also in hospitals for hospitalised voters, at care homes and sheltered housing etc., in prisons etc. for detainees, and at home upon application for voters who on account of illness or disability are unable to turn up at a polling station on election day.

The Electoral System in Denmark

The Danish ministry of economy and interior informed that voter turnout was 70.8%. 3,226,558 cast their votes. They voted for 2432 seats in the 98 municipal councils.

Number of councillors and political parties in the Municipal Councils: 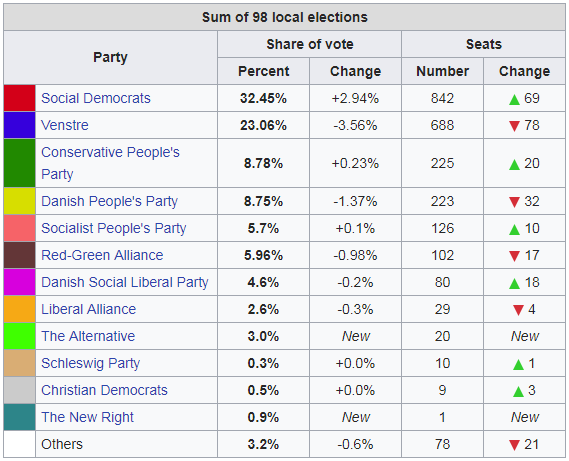 Mayors in the municipalities:

The mayors (Danish:Borgmester; plural:Borgmestre) of the 98 municipalities heads the council meetings and they are the chairman of the finance committee in each of their respective municipalities. Only in Copenhagen, this mayor - the head of the finance committee and council meetings - is called the Lord Mayor (Danish:Overborgmester). The final decision on who will be mayor must be made by the municipal councils no later than 15 December after local elections every four years. 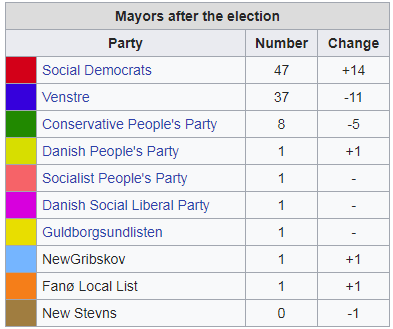 The Danish ministry of economy and interior informed that voter turnout was 70.6%. 3,074,840 cast their votes. They voted for 205 seats in the five regional councils.