News collected by the PBP Project

Following years of work by the Participatory Budgeting Project (PBP) and partners, New York City Mayor Bill de Blasio announced in his State of the City address on February 13th that he is launching participatory budgeting (PB) in all of the city's public high schools (there are over 400 total). The City will give every high school $2,000 for students to allocate, to give young people a powerful new opportunity to learn and practice democracy, and to inspire lifelong civic participation.

In 2011, PBP launched Participatory Budgeting in New York City (PBNYC) with City Council Members Mark-Viverito, Lander, Williams, and Ulrich, and Community Voices Heard, the Community Development Project, and other partners. PBNYC has since grown into the largest local civic engagement program in the country, engaging over 100,000 New Yorkers in deciding how to spend $40 million last year. 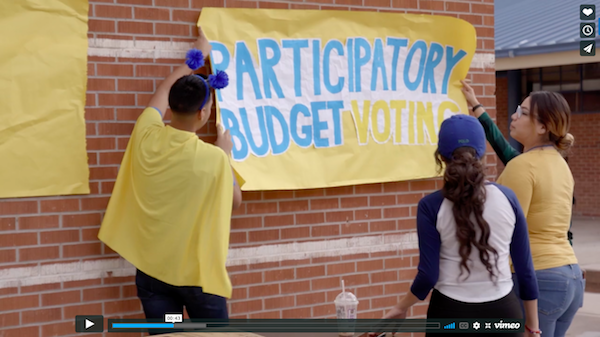 "We've got to prove to our young people that they've got the power to change the world around them. When people feel empowered they participate. When they can see the impact they're making they come back for more. So starting next school year public school students will learn how to stay civically engaged and to fight for the future they believe in with our Civics for All initiative.

And they will learn in a hands on way by putting their skills to the test right there in their own school building. We're going to borrow a great idea pioneered by the City Council – participatory budgeting. We're going to give every high school in this city $2,000 for the students to make the decisions on how to use. And we know that when students feel that opportunity to make a difference it will be the beginning of a long lifetime of participation."