Over a hundred nationalities live side by side in Barcelona. The people who live and work in the city enrich it with their cultures, customs and beliefs, making Barcelona an example to follow for many others. The City Council is to promote participation from this diversity of people, enabling them to have their say on everything which affects them as city residents.

The measure on diverse participation comes within the framework of the new regulations and aims for broader participation in political decision making in the city from people with different cultural origins and backgrounds. The idea is for that diversity, which represents 25% of the city's population, to be recognised and be able to express itself in the City Council's participation channels.

This recognition and effort to give diversity a more visible profile will be complemented by four more areas. Firstly, the measure sets out how the institution must deepen its knowledge of different socio-cultural needs and circumstances relating to participation, jointly generating places for collectives to organise themselves.

Municipal staff must actively take on an intercultural perspective for action aimed at promoting public participation. Likewise, municipal media and communication channels must take into account cultural diversity criteria, while the institution must facilitate the exercising of the political rights of all city residents. 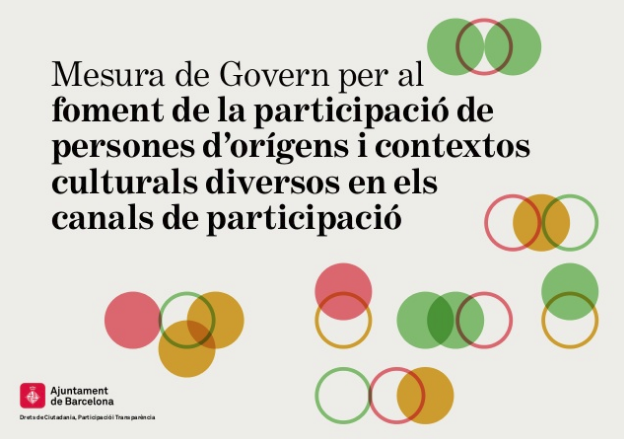 There are 5 main points in the measure:

-                      Recognize the cultural diversity improving the participation of different cultural origin people in the channels that the City Council of Barcelona makes available to the citizens.

-                      Deepen in the knowledge of sociocultural realities and necessities in the citizen participation and contribute with spaces of autonomy and self-organization, from a continuous work with different cultural origin people.

-                      Strengthen the capacity of the public servants of the City Council to incorporate actively the interculturality in all the actions directed to promote the citizen participation.

Both pilot tests are included in a big package of measures that will be carried out, among which is included a campaign of significant diffusion of intercultural perspective with the elaboration of criteria and protocols to stimulate the participatory processes. Also, support will be given to different cultural origin media projects. All the actions included in the Measure of Govern will suppose 574,000 euros of the budget.