In 2019, all inhabitants, no matter their age or nationality, will be able to submit an investment project for it to be voted by citizens. This is the beginning of a participatory budgeting plan approved by unanimity the 17th december by the Bordeaux City Council.

The Bordeaux City Council will allocate a budget of 2,5 milion euros in 2019 for sustainable development projects. The citizens will propose them and they will be voted. This tool will enable residents to "act directly and concretely to improve their environment towards an ecological transition of the territory".

This money represents the 1,65% of the investment budget of the city for next year. This involves an average of 10€ by inhabitant in comparison of other cities such as Grenoble (16€/inhabitant) or Paris (45€/inhabitant). According to the Deputy Mayor, Nicolas Florian, "the average is 5€ per inhabitant in the 80 French circonscriptions which have participatory budgetings". 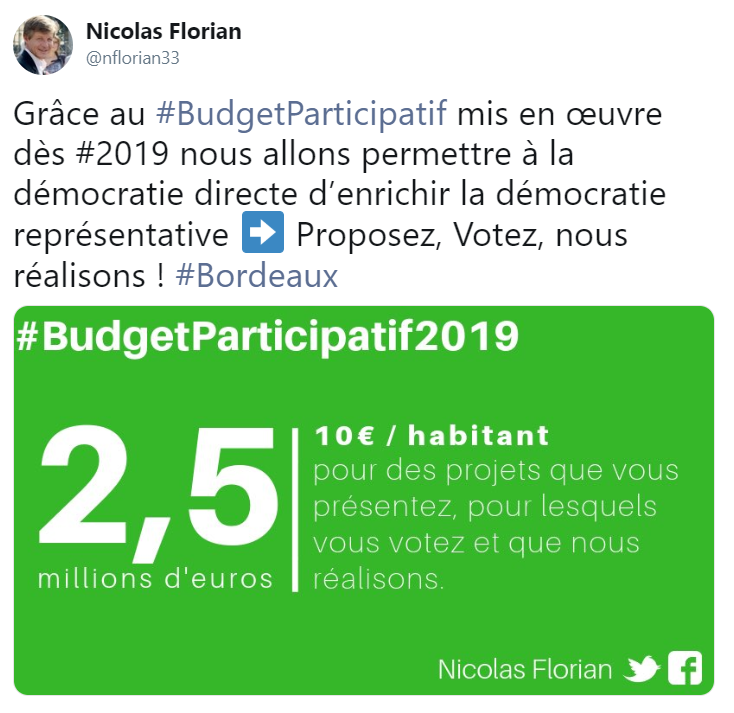 From the end of January 2019, citizens will be able to submit their projects through an easy online form. From March to April, an ad hoc committee will verify whether projects are eligible according to some criteria. For instance, they must be of general interest, of the area of city and metropolis intervention (economy, green spaces, urbanism, education, culture, cleaning…), which can be implemented in a period of 2 years. Also, each project shouldn't cost more than 250.000€.

The voting phase will take place in March 2019 and will last one month. All residents of Bordeaux will be able to participate in it, no matter their age or nationality. The city expects the participation of 10% of the inhabitants. They will be free to vote three different projects and the most voted ones will be adopted.