The IOPD co-hosted "Covid-19: Lessons Learnt for Local Democracy" alongside UCLG and ICLD 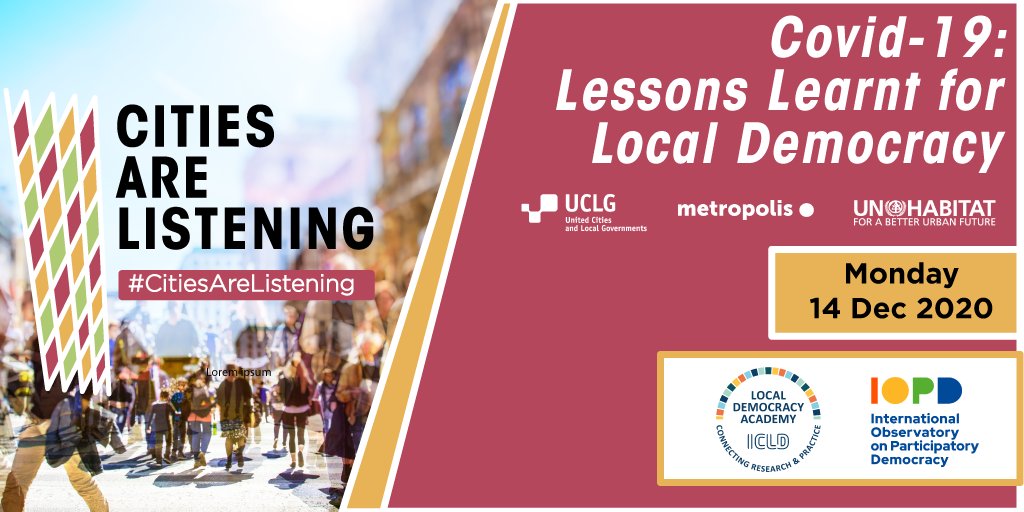 As a step to deliver the Pact for the Future that UCLG agreed to develop in its latest World Council in Guangzhou, the #CitiesAreListening Experience that took place on December 14th addressed the renewal of local democracy, an integral aspect of the Pact, and how the lessons learned during the pandemic could allow us to bring the UCLG Decalogue for the post-COVID-19 era to the ground.

The event was held in partnership with the ICLD, as part of its Local Democracy Academy and was facilitated by UCLG, Metropolis, the International Observatory on Participatory Democracy (IOPD) and UN-Habitat. The session built on the Live Learning Experience on Local Democracy held earlier during the year, and brought stakeholders together to address the impact of the pandemic on our democratic systems and what local and regional leaders can do, moving forward, to renew local democracy in a way that leaves no-one behind.

After the introduction by IOPD Coordinator Adrià Duarte, UCLG Secretary-General Emilia Saiz made the opening remarks:

"Democracy has been challenged. Decision-making at the local level has been critical, and the defense of the commons is a key topic in our life. This makes the debate on local democracy even more relevant"

Ana Maria Vargas, Research Director at the Swedish International Centre for Local Democracy moderated the session, which counted with the participation of Anders Knape, President of the Swedish Association of Municipalities and Regions, Imen Ouardani, Vice-mayor of Sousse and James Manor, Professor Emeritus of the School of Advanced Study at the University of London.

Anders Knappe referred to the Swedish case, where around 75% of the public service provision is a local/regional competence (public transport, health care, education, etc.), meaning that LRGs are truly at the forefront of the crisis in Sweden. However, the urgent and unprecedented decisions needed were faced with a constraining system:

What is more, the President of the Swedish Association of Municipalities and Regions pointed out, is that even in a country with such a tradition of local service provision, some state actors found in the health crisis an alibi for recentralisation.

Imen Ouardani explained how the pandemic and the massive solidarity the population showed, helped the city to become aware of the urgent need for public participation and digitalisation. Despite the fact that decentralisation mechanisms in Tunisia are relatively new, she stated that civil society is considered a strategic partner of the City of Sousse. 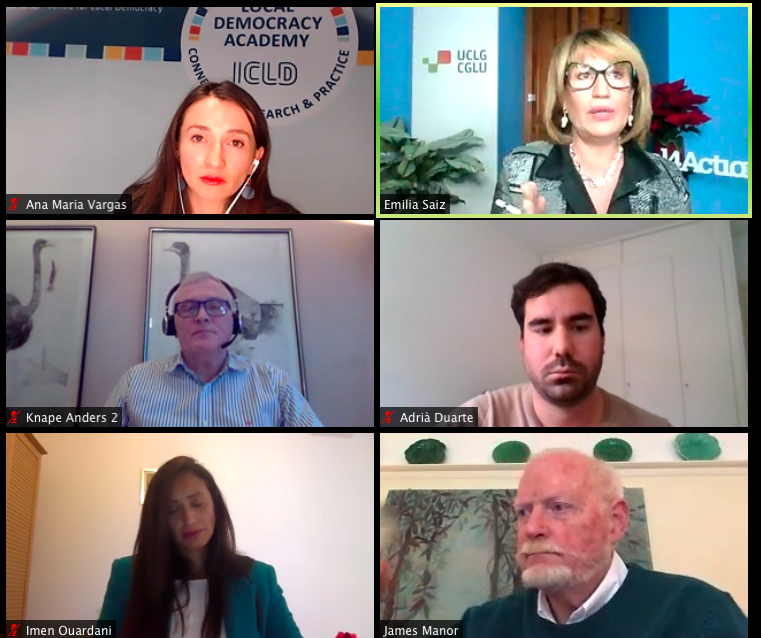 Emilia Saiz used her intervention to share some insight into the UCLG's research with the London School of Economics and Political Science on Emergency Governance Initiatives across more than 50 local governments in 37 countries. The Secretary General of UCLG warned that:

"Underrepresentation of vulnerable groups in decision-making spaces has been critical, and we need to face this. Our priorities and division of responsibilities might not change drastically, but the spaces of dialogue and the relationship between healthcare and local public service provision will need to change - at least in a significant part of the world"

James Manor warned against states who neglect the expertise of local governments and their insight into their own communities, which is essential during an emergency like Covid-19. He added that "local governments have an ability to encourage trust and help people overcome the fear of medical services".

The session came to an end with participants laying out their wishlist for 2021: Structural dialogue, cooperation among spheres of government, supporting local and regional governments' efforts to localize the agendas, and bringing all stakeholders together were seen as critical elements  for a successful recovery.