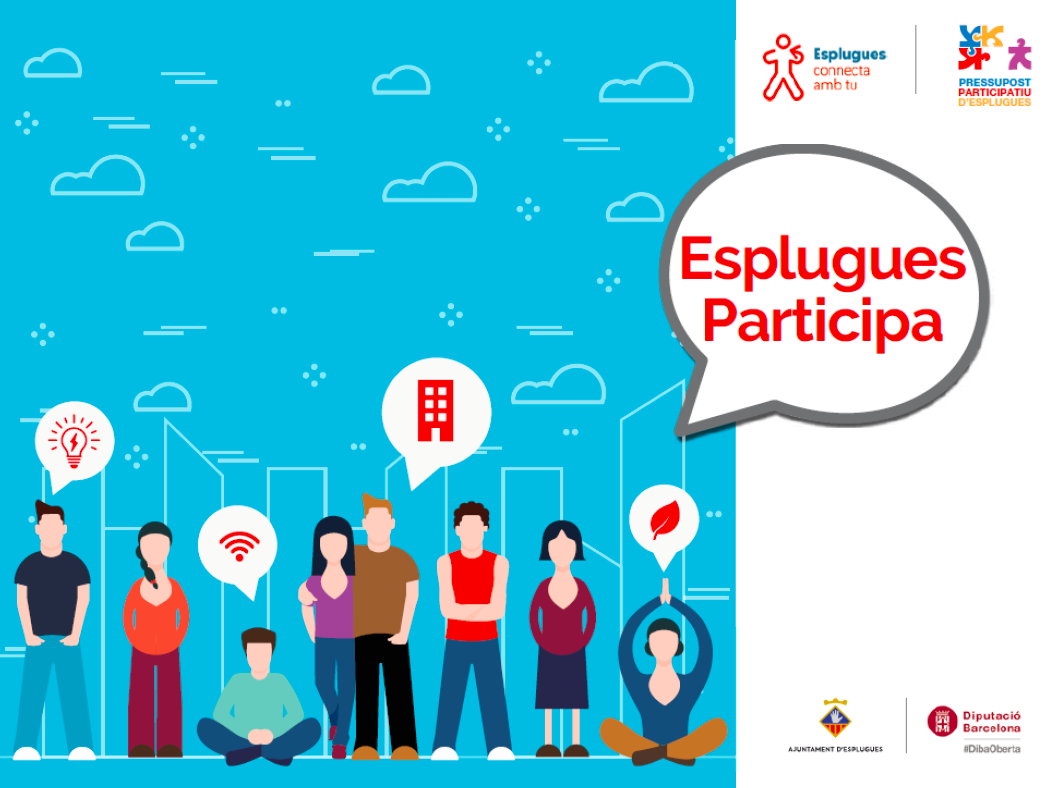 To improve the effectiveness and efficiency of participatory democracy mechanisms.

By changing the methodology of the Participatory Budget process.

In the first editions (2014-2017), citizens participated through working groups that prepared and agreed on proposals (face-to-face) and then presented them to the "Participatory Budgeting Committee". Some sessions were held to gather proposals from other segments of the population (sectoral councils, institutes, etc.), but these were decided upon by the working groups, made up of people who were available to hold regular meetings at specific times. During this period between 68 and 165 people participated.

In the 2018 edition, the process is transformed by diversifying the possibilities of participation, creating a hybrid formula (face-to-face and online) to facilitate the participation of citizens, especially those who may have more difficulties.

From this edition onwards, participants (over 16 years old, registered at Esplugues) can take part in one or more phases of the process:

We have moved from representative democracy to direct democracy, where each person decides when and how to participate.

Participation has increased quantitatively (from 165 people in the 2017 edition to 1,440 in 2018, which translates into more proposals to improve the city and support for them) and qualitatively, diversifying the way of participating and, above all, the profiles of participants.

The results of the evaluation by the participants are very positive. 9 out of 10 people surveyed say they would participate again in the next editions and would recommend someone else to participate (2018 data).

The process was disseminated in other participatory bodies and spaces, such as sectoral councils, in the participatory sessions called "The elderly in the neighbourhoods", etc. The process was also disseminated in other local projects, educational and youth centres (mentioned above). The employees of the Esplugues City Hall were also informed and encouraged to participate, as most of them are citizens of the city as well.

The assessment of this whole articulation has been very positive.

At the municipal level, a participatory budget monitoring committee was set up. This body is responsible for evaluating and ensuring the proper functioning of the participatory process. It is currently made up of a municipal political-technical team.

The creation of a driving group was incorporated into the implementation of the winning proposals. In this sense, in order to implement the winning proposal of the 2018 edition (Educational materials for public schools and institutes), several meetings were held with the educational centres to determine which materials were needed and how the purchase and delivery of these would be done.

In the 2019 edition, a session was incorporated to present the 10 finalist proposals, in which the persons or groups that promoted them had more support and presented them in an open session.

On the other hand, adolescents were empowered to explain the process and help older people to develop online proposals, in the framework of an intergenerational project to address the digital gap.

For the development of the closed sessions with specific groups, complicity has been sought with other areas of the City Council and with other organizations.

The most innovative element is the methodology, as it ensures that different population profiles can participate and that the process is inclusive.

All the elements are replicable to other institutions if the resources and will to carry them out are available. Indeed, we have replicated part of the model in other participatory processes, such as in the process for the elaboration of the Municipal Action Plan that is currently being carried out.

As it is an open source platform, it can be easily installed in organizations other City Councils.

At the time of the design, the "fatigue" of the previous model of participation was taken into account, as it was noted that it was the same people who were always participating. The aim was to open up participation and allow each person to decide where and when to participate.

The intention was to incorporate online participation but, aware of the digital gap in the city, the above-mentioned measures were taken. We also acknowledged also the difficulty of making the general population aware of the process and how to participate in it. For this reason, the design was thought to reach the spaces where citizens were (both in virtual and physical spaces): sessions in all high schools and posts in social media allowed us to reach the youngsters; sessions and I.T courses in care centres for the elderly; sessions in Catalan courses and other language courses for immigrants; sessions in special work centres for to people with intellectual disabilities. This allowed us to get closer to all those groups that would otherwise be difficult to approach through online channels only.

Without a doubt, political and technical will was needed. Without the support of the government team and the various technical departments involved, the practice would not have been successful.

On-site evaluation took place in the workshops. Once the process was completed, an evaluation questionnaire was sent to everyone registered on the platform.

The results of the process were also returned to the citizens through infographics, publications in local media and through the participatory platform. There is also a follow-up section in the same platform, in order to be able to check the degree of execution of the winning proposals, as well as to disseminate the implementation in the local media.

The territorial and thematic transferability of the system, its inclusiveness are extremely interesting. A prerequisite that guarantees the quality of the process, the training of the facilitators of the groups, the mobile points and the intergenerational activities. Thank you for this beautiful project.

Putting in place a multitude of channels to participate, such as spots in youth centres and closed groups to reach more difficult to reach groups (i.e elderly) is an interesting approach. To go even further in citizen participation, their involvement in the monitoring of the project and in making proposals for improvement could be enhanced, for example in associating citizens to the monitoring committee.