More than 212,000 people participate in the first citizen vote in Madrid

The results of the Madrid First Citizen Vote, celebrated in Madrid from 13 to 19 February 2017, have been published. Vote count started on Monday at 10 a.m. in the Cultural Centre Matadero. The City of Madrid has been overwhelmed with the vote counting. We’ve had to wait for a week to know the results, which were expected to be ready on Tuesday.

Hundreds of volunteers have been involved by helping with the count of votes, given the unexpected levels of high participation. A total of 950.015 votes have been issued from 212.108 participants. Half of this votes were done through the webpage, 17% in the urns and the rest 33% arrived by post.

94.01% supports the “single transport voucher” proposal, according to which an integrated ticket would be created to be used during 2 hours in any public transport of the city. “Madrid 100% sustainable” proposal has received the support of 89.16% of participants. This proposal asks for the compromise of Madrid City Hall to sign the “MADRID SUSTAINABLE CITY” manifest.

Also, this vote gives end to the consultation about remodeling the “España Square”. Finally, X project “Welcome Mother Nature” has been elected with 52.19% of votes (Y project received 30.06% of votes; the other 17.75% votes are white votes). This project is based on the idea of “landscape architecture” and aims to unite nature and city by opening a free, equipped, fresh and connected urban space where citizens can experience life.

This consultation also asked for the new model of Gran Via (a major avenue of the City). A large majority of citizens agrees in improving the pedestrian space, improving back squares, increasing the number of pedestrian walkways and giving priority to the collective transport. Finally, this consultation included questions related to certain districts. All results are available in the webpage of Decide Madrid https://decide.madrid.es/vota.

Having surpassed all the forecasts of participation, the City Council believes that the participatory processes opened at the moment in the capital will be well received. This great consultation of February has allowed thousands of citizens to decide about issues that affect their day to day or aspects of the future city. Changing the view of citizen participation is one of the objectives of the Madrid government. 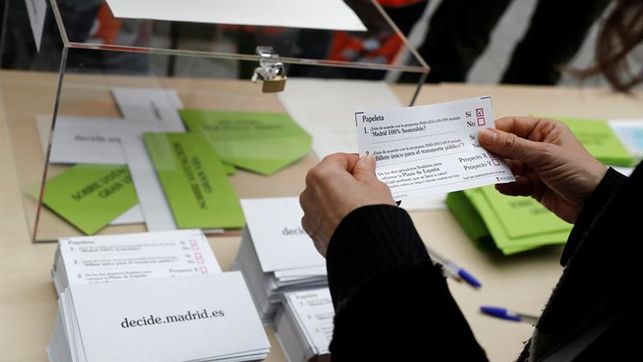