Six years after the introduction of the European Citizens' Initiative (ECI) with barely any impact on EU legislation, the constructive criticism, particularly from the European Economic and Social Committee (EESC) and other institutions such as the European Parliament and the European Ombudsman, is finally beginning to bear fruit, tempting the European Commission to review this important instrument of participative democracy.

At the 7th EESC ECI Day First Vice-President of the Commission Frans Timmermans presented the main changes, including lowering the age from 18 to 16 years, which would open up ECIs to 10 million new potential supporters, or simplifying data requirements for signing initiatives. 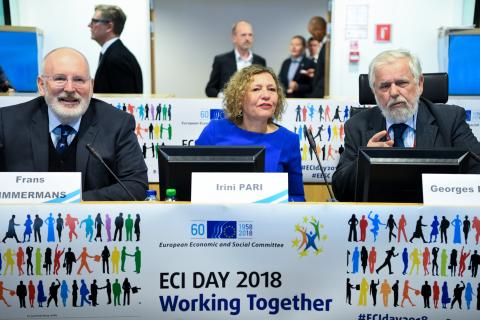 Opening the event, EESC President Georges Dassis welcomed the Commission's initiative as a leap forwards as regards the simplification and reduction of the bureaucratic burden, but regretted that the follow-up and dialogue have not been reinforced in the current proposal.

"The dialogue between the ECI organisers and the European Commission needs to be strengthened. We need genuine follow-up on people's issues and worries," demanded Mr Dassis, who also motivated participants to "keep up the dialogue and transnational cooperation" despite the setbacks.

This year, the ECI Day focused on the theme of Working together, which aimed to highlight the value of cooperation and shared responsibility in promoting active citizenship.

A well-functioning ECI must empower people

In his keynote speech, Luca Jahier, president of the EESC's Various Interests Group, emphasised the importance of Article 11 TEU, which imposed a legal obligation on the European institutions to consult and engage in dialogue with civil society and citizens. "A well-functioning ECI should empower citizens; it should give them a voice, a sense of belonging and identity, helping to rebuild trust and to rediscover the solidarity of the European project".

The EESC has therefore always been very vocal about the ECI, Mr Jahier stressed. "Citizens and civil society need to use this instrument to provide innovative solutions, inform the population about matters of public interest, open up channels of communication with the political elite and hold public authorities to account".

European Ombudsman Emily O’Reilly underlined the importance of making the ECI as transparent as possible. "In an era of gross online manipulation of the democratic process, we must protect the ECI from any possible abuse," she said.

Deputy Minister for the Bulgarian Presidency of the Council of the EU Monika Panayotova warned that the future development of the EU will depend on its ability to bring citizens closer to its decision-making and to engage in an open and direct dialogue with them, addressing their expectations and concerns.

A well-functioning ECI must give people a say

Three workshops followed the session, in which participants were asked to look at possibilities for strengthening the ECI. They consistently expressed the wish for the EU to become more participatory and called on European and national leaders to listen to their citizens. EU and national politics as well as parliamentarianism should therefore become more interactive, using the new tools to bring people together rather than produce a series of individual fighters.

One of the workshops focused on an ECI Online Collaborative Platform, a project which is going to be launched officially in a few days' time. The platform should support citizens interested in starting an ECI and will showcase best practices, help with finding partners in other countries and provide active advice by experts. Participants welcomed this platform, but suggested improving the content by including more explanatory videos and simplifying information or by allowing users to connect to each other more easily.