The citizens of Barcelona cast nearly 48,000 endorsements of the participatory budget projects and prioritized the 204 projects that will be submitted to the final vote

Through the platform Decidim.Barcelona, the residents of the city have prioritized among the more than 800 initiatives presented by the citizens themselves.

The 20 projects with the most support in each district will be submitted to the final vote, which will take place between June 10 and 20 and will choose where 30 million euros will be invested.

By typology, investments in educational facilities and the improvement of public spaces are the ones that receive the most support. Projects related to school facilities and school environments represent a quarter of the projects that go to the next phase.

Since the start of the participatory budget process,  Decidim.Barcelona has more than doubled the number of people registered on the platform, with 44,000 new registrations. 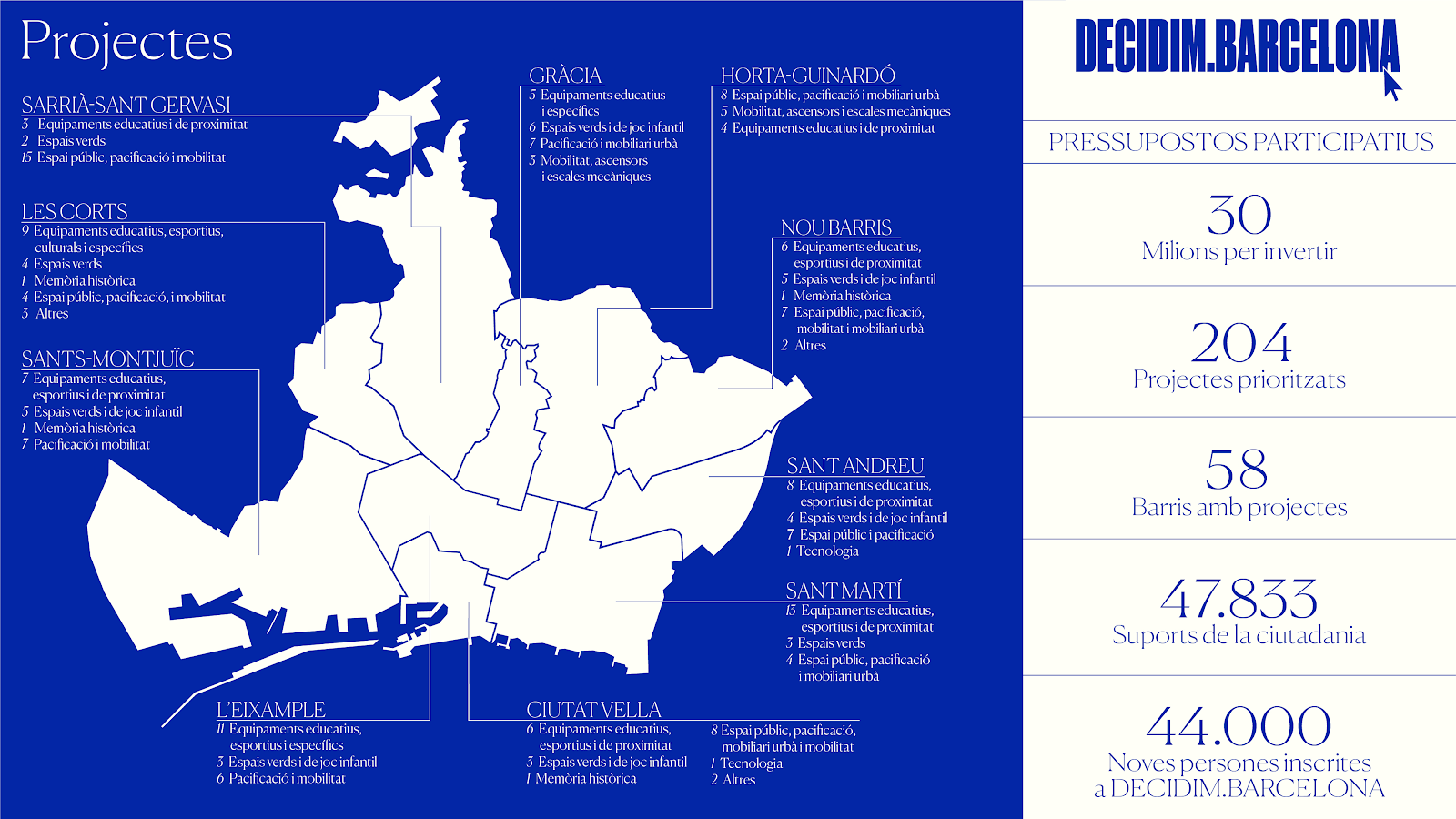 The citizenry has defined among which projects will be chosen where to invest 30 million euros of the municipal budgets before the end of the mandate (in 2023). Between March 22 and April 5, 47,833 support votes were cast, and the number of people registered on the municipal participation platform Decidim.Barcelona, where the process takes place, has increased by some 44,000 people since the participatory budget process began a year ago, reaching a total of 80,500 registrations.

In this phase, which is now closed, every person registered in Barcelona could choose up to ten initiatives among the 822 projects presented by the same citizens, so that the 20 projects with more support for each district are the ones that advance to the final phase of the participatory budget process.

These figures demonstrate the interest generated among the residents and are also explained by the dissemination made by many of the same groups promoting the initiatives that were to be chosen. At the same time, they reinforce the need and opportunity to establish mechanisms for participation, decision making and direct democracy so that citizens can influence the administration's decisions.

From June 10 to 20, digital voting with in-person support

The voting period will take place between June 10 and 20, will be in digital format through the platform Decidim.Barcelona and will have two support points in each of the districts (with the exception of Les Corts, which will have only one). These points will be located in the District  headquarters and other facilities of proximity and for at least seven days will have the necessary attention for those who wish to cast their vote with the necessary support.

At these same points, small physical exhibits will be set up to showcase the 20 finalist projects from each district.

The voting process will work with the shopping cart method. According to the budget allocated to each district and the cost of each project, each person registered in the city aged 14 or older will be able to choose as many projects as they consider until the budget is exhausted. Finally, the projects selected the most times will be the ones that will be finally chosen to be carried out, so that the 30 million euros of the participatory budgets will be used up.