Berliners voted in favor to expropriate big landlords in referendum

On Sunday 26 September 2021, a non-binding referendum was held after the citizen's initiative DW und Co. Enteignen' (Expropriate Deutsche Wohnen and Co.) succeeded in collecting the necessary signatures. 56% of Berliners voters approved the project to allow the expropriation of ''private housing companies'', in particular those with more than 3,000 housing units. The authorities of the City-State of Berlin now have the responsibility to adopt the proposal supported in this referendum.

The signature collection process and the proposition of the vote

To organise a referendum, citizens can propose laws and if enough signatures are collected, the government is forced to hold a referendum. The signatures must be provided on a specific paper form together with the address and date of birth of the signatory, so that the electoral office can verify their residence in Berlin.

The first phase required the collection of 20,000 signatures - in this case 77,000 were collected between April and September 2019. Then the proposal underwent more than a year of official legal scrutiny before being declared valid. During this period, the government tried to convince DW&Co Enteignen to water down the wording of the housing socialisation request to make it a mere suggestion. The campaign held its line and did not succumb to this attempt at co-optation.

The government coalition's official position on the proposal stressed that an expropriation bill would require at least 226,000 housing units in Berlin to be taken into public ownership, which can only have been achieved through a politically and legally controversial socialisation law. 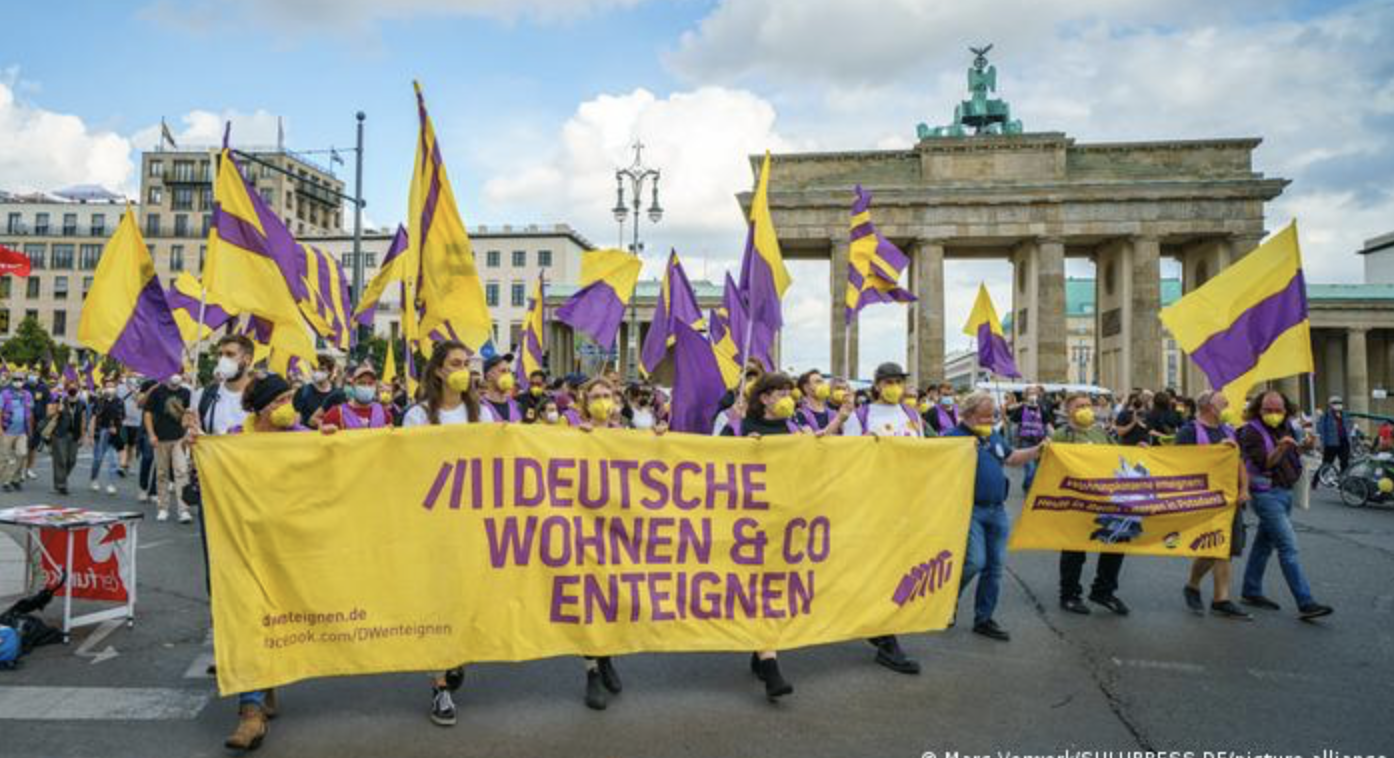 The campaign began the second phase, which required the collection of signatures from 7% of the eligible voters in Berlin, about 172,000 people, with the aim of forcing a referendum on the issue.

The approach to achieving this was to organise Kiezteams (neighbourhood teams) in every district of the city, which could collect signatures in public places.

Barriers to entry were made low: each Kiezteam and campaign team, as well as the whole campaign, hosted regular online meetings, as well as creating a mobile application where anyone could view and participate in upcoming public collections.

Many others also downloaded the form and collected signatures among their social circles and work colleagues, without being linked to the campaign structures.

Activists believe the legislation would be constitutionally compatible with Germany's Basic Law under the never-before-used Article 15, which states: "Land, natural resources and means of production may, for the purpose of nationalisation, be transferred to public ownership or other forms of public enterprise by a law determining the nature and extent of compensation." 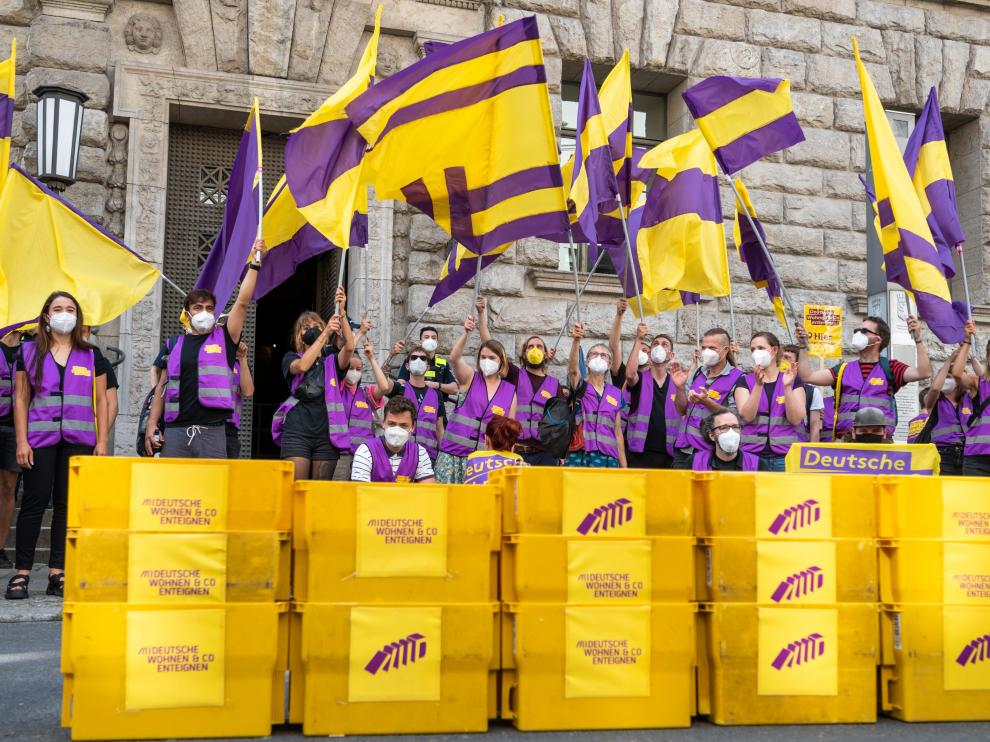 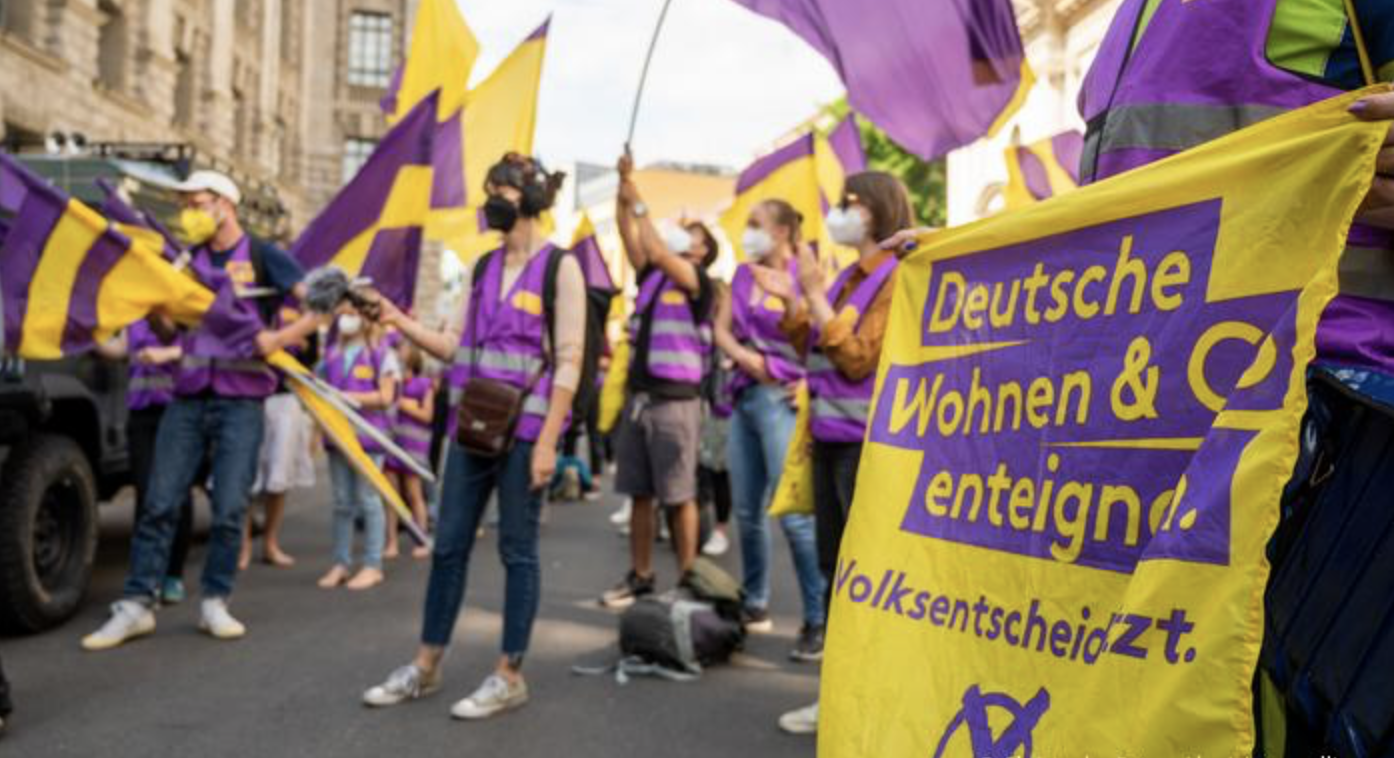 In the last 10 years, the cost of rent has doubled, but wages have not risen in the same period of time. The aim of the petition for a referendum was to put an end to the rent madness. Citizens believe that the housing companies are making big profits in Berlin by raising rents.

They no longer accept this and have called for a referendum to socialise over 240,000 flats owned by Deutsche Wohnen, Vonovia, Akelius & Co.

The real estate giant Deutsche Wohnen owns about 113,000 housing units in the German capital, so it was the main target of the referendum campaign. Several other companies, such as Vonovia, which is trying to take over Deutsche Wohnen, and the Pears group are also affected by expropriation legislation.

The referendum was also accompanied by a debate on whether the proposed plan complies with the German constitution, and any future legislation could face a legal challenge.

The 'yes' vote received 56.4%, while the 'no' vote received 39% in the non-binding referendum. The resounding popular vote does not mean that the measure will become a reality. Huge legal and political barriers remain in the way.

Regardless of the strength of the vote, the referendum is not legally binding and the proposal will only become law if the ruling parties in the Berlin Senate choose to make it so.

If the Berlin Senate were to pass an expropriation law, it would almost certainly be subject to various judicial challenges. In April 2021, Germany's Federal Constitutional Court overturned the Berlin Land Government's decision to impose a five-year limit on rents in the city.

Jakob Hans Hien, a lawyer at Knauthe, one of Berlin's leading real estate law firms, believes that an expropriation law would not be applicable in Berlin. He believes that the aim of targeting only companies or individuals with 3,000 flats or more has no objective basis.

Wikipedia's article on the initiative