To achieve that citizens, via mechanisms of Social Comptrollership, are a key actor in the revision of public services provision fulfilment, such as the maintenance of green spaces, garbage collection and lighting by the municipal government and the companies hired to provide these services.

The Sindicatura de Chihuahua is the entity of the Government of the Municipality of Chihuahua in charge of monitoring the municipal heritage; therefore, supported by this mechanism of citizen participation, we intend that citizens become direct evaluators of the use of public resources and services.

The inspection process is “citizenised”, tools are transferred and people's capacities are strengthened in order to review services purchase/tendering processes as well as the obligations of the municipality's suppliers.

Generally, people perceive municipal heritage monitoring as a technical and boring process. Since the creation of Citizen Guardians, information on the functioning of bidding processes and hiring of companies for the provision of public services has been made available to the public.

There are currently 81 active Citizen Guardians, and more than 329 people have been contacted through over 33 visits to parks and settlements throughout the municipality.

At the same time, a training plan has been implemented for the Guardians, on the work of all municipal public institutions, as well as the services they provide and the platforms and channels through which they can have direct contact to the attention of their complaints and reports. 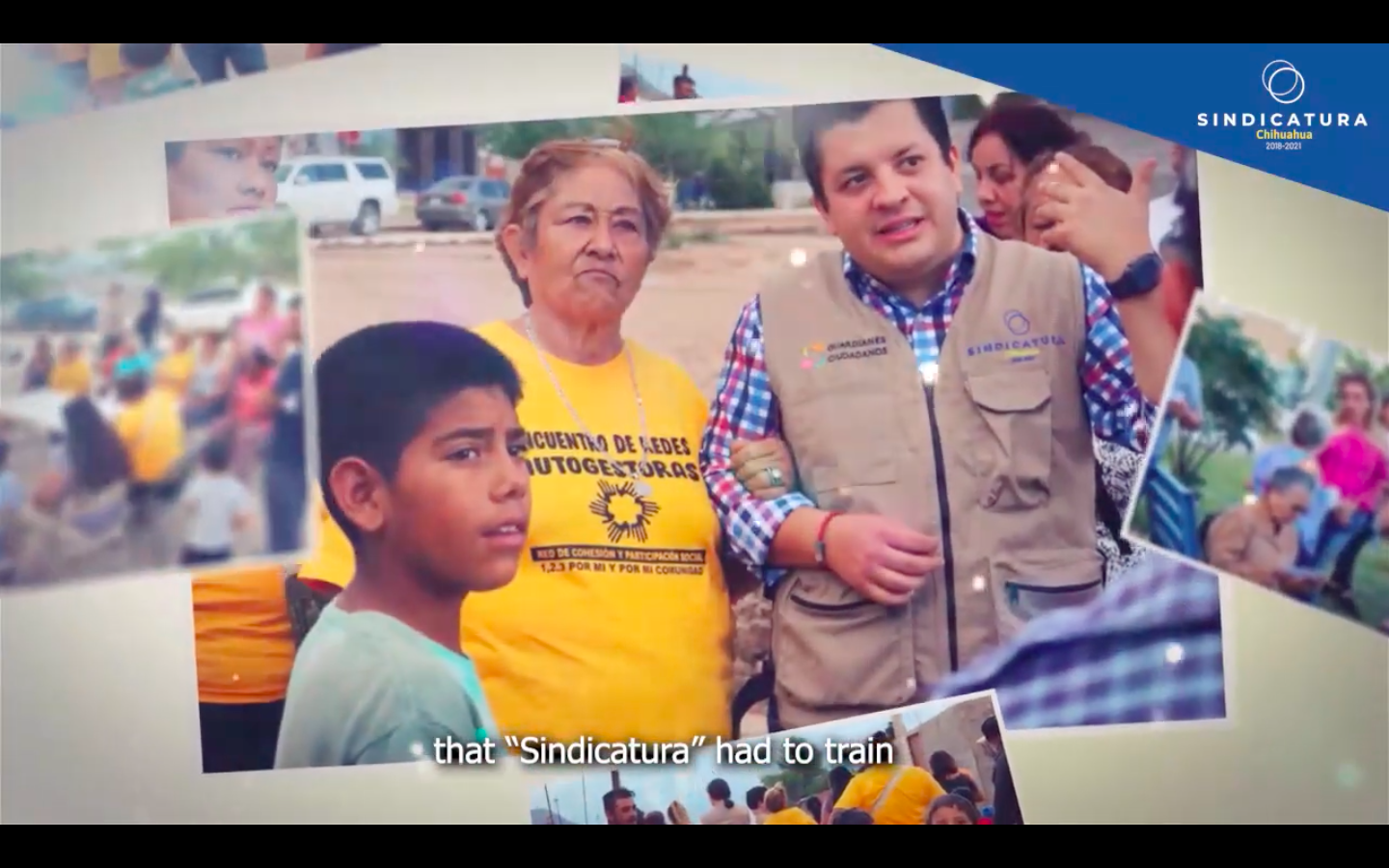 During the nine months of the Citizen Guardians program, the Sindicatura has focused on the revision of contracts for the provision of public services, specifically those aimed at the maintenance and cleaning of green areas in the municipality.

During 2019, the active Citizens' Guardians reviewed the proper functioning of 11 contracts for the care and maintenance of public spaces and 2 for street lighting.

In 2020, there are 11 contracts with 11 different companies that are responsible for the maintenance of 745 public spaces. Despite the contingency currently experienced due to the COVID-19 pandemic, the Sindicatura has made progress in the documentary review of these contracts, hoping that by the end of these, all have been reviewed by citizens.

In addition, we have made available to the public, in a “Watch your city” section on the site of the Sindicatura, a tool where you can geolocate and get details of the contracts and responsibilities of companies and the municipality in terms of cleaning and maintenance of more than 1,000 green spaces in the city.

This program arises as a response to the social call for justice in government actions that have been affected by discretionary and inefficient processes carried out by the authorities. Citizen Guardians has found great allies in civil society, where communication channels have been expanded in both directions and strengthened:

In turn, this program has been complemented by other open-government tools already available from the municipality. For example:

This has led to new channels of communication with a high level of response (rarely obtained through traditional media) which plays an important role in highlighting allegations of corruption and complaints in specific cases, and in permanently monitoring the processes of evaluation of the institutional performance of the government branch.

With the implementation of this program, a cycle in which all people play an important role has been created.

The creation of these tools of transparency and citizen participation in public institutions generates trust, and it is precisely this level of trust that encourages citizens and organisations to participate in the actions of the public service. In this way a virtuous cycle of action is created, in which people are empowered and participate, and authorities work to improve public services.

Citizen Guardians is a mechanism of direct intervention with municipal public services, through social accounting. These types of actions represent new forms of intervention by society within the actions of politics, putting into practice the basic principles of law and democracy, which in turn translates into a healthy process of renewal of the political and social participation of people in their city.

The direct participation of citizens in this program allows them to know exactly the role of the institutions, one of the main problems being that it is not clear enough. The correlation between economic development and institutions is only based on the perception of the functioning of the state, and the concrete institutions that lead to development, and the way in which this is done, are not specified.

Thus, people, by being involved in this program, are provided with knowledge and skills that encourage them to make use of other mechanisms of citizen participation in the future.

This exercise is fully transferable to any national agency and even to civil society organisations interested in issues of transparency, anti-corruption actions and citizen participation. The Law of Transparency and Access to Information in Mexico allows everyone to have access to the contracts for the provision of public services as well as to create information documents specific to the needs of those carrying out this exercise.

In addition, the institutionalisation and systematisation of this exercise has led the Sindicatura to have two internal procedures (see Annex), which may be an important guide for those interested in replicating this exercise. In addition, we also have a Manual for Citizen Guardians, which is the training manual for people and which can be adapted to any city.

Finally, from the Chihuahua Syndicate we encourage the exchange of good practices, so the Citizen Guardians program and all its inputs are fully transferable to individuals, organisations or governments. The official website of the entity is open-source based.

Thanks to globalisation, in recent years concepts and tools such as open government, transparency, anti-corruption and citizen participation have been introduced to the idea of governance, leading to a change in the political culture and democratic traditions of the region.

These changes have led to transformations in the scope of citizen participation, which is no longer limited to placing trust in political actors or parties through the vote. There is now an express need to use mechanisms of direct and semi-direct democracy, as well as to strengthen the role of civil society in influencing public decision-making and monitoring government action.

In addition, the cost of replicating this exercise is low, but it has important benefits in terms of participatory citizenship.

Before visiting the colonias and appointing Citizen Guardians, the Sindiatura carries out an analysis of the complaints and reports on the public services in the area to be visited. This information is used to hold people accountable for their visits to the colonias, so that the community knows how many complaints and reports they have made about failures in public services.

Once the visit is made, surveillance cards designed for people to monitor the maintenance of parks, garbage collection and street lighting in their colony are issued and a lead Citizen Guardian is appointed. The results of the citizen's cards are compared with the status of the municipal government's services. If these documents show evidence of failures not contemplated by the authorities, the directorate in charge is notified.

It also compares whether the number of complaints about public services increased or decreased after the Citizen Guardians filled out the surveillance cards.

On the other hand, as a new element in the training process for Citizen Guardians, a pre-post evaluation is applied regarding the knowledge of citizens in the processes of purchase/awarding of services, the structure of municipal government, among other topics.

Citizen Guardians is an interesting project to provide citizens with impact on the services that are provided to them. It has an educational aspect, an anti-corruption aspect and creates a role for the community. A mechanism could also be created to involve citizen's in the evaluation and improvement of the project itself.