On Thursday 18 June, the session dedicated to local democracy within the framework of the live learning experiences took place

The COVID-19 pandemic has a strong impact on local and regional governments, affecting electoral processes, meetings of municipal councils and political bodies, and local decision-making processes.

This session was part of the live learning experiences organized by UCLG, Metropolis and UN-Habitat, and addressed the impact of the pandemic on local democracies from different perspectives, such as human rights or the risk of recentralization or increased authoritarianism. You can read here the concept note and watch the complete recording of this experience. 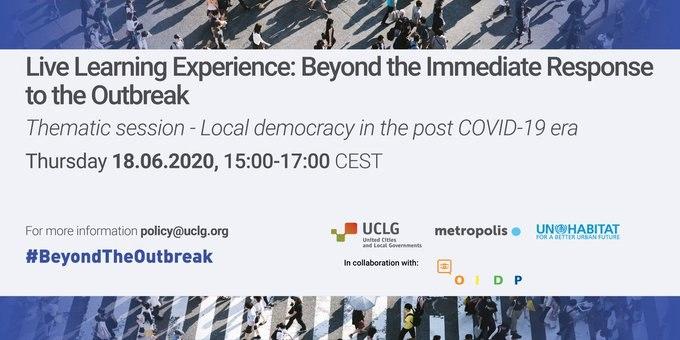 The session involved local and regional elected representatives as well as experts from around the world to show their political commitment to decision-making at the local level to achieve their role as drivers of change. The solidarity, local democracy, and protection of the common good shown by local and regional governments will be vital in rethinking our societies in the wake of the pandemic.

Below we highlight some of the interventions which took place in this experience:

Pascal Clouaire, Deputy Mayor of Grenoble, presented the actions implemented by the city to maintain and deepen local and participatory democracy since the beginning of the pandemic thanks to online tools: participatory budgets via video conferences with project promoters, a citizen collaboration platform (Grenoble Voisins Voisines) that brings together people who offer and require help of any kind, and a citizen jury to fight against the isolation of older people.

Laia Bonet, Deputy Mayor of Barcelona, highlighted the value of democracies in the face of populism, since the former combat inequality, guarantee the rights of the entire population and protect the most vulnerable, such as women, and the LGTBQ community in the face of the lack of services. She pointed out that the pandemic has highlighted the importance of public services, and explained that local autonomy, also key to democracy, allows local authorities to guarantee these services. He added that autonomy is not to the detriment of multilateralism, in which territories must also be present.

Nelly Ouassenan, Deputy Mayor of Cocody, expressed her pride in how the pandemic, in Cocody, had served to strengthen local democracy, as they understood that in order to fight the former, the latter could not be dispensed with. However, she argued that they were not unaware of the socio-economic effects of the crisis and had therefore carried out campaigns and programmes to raise awareness, support victims of domestic violence, street children and businesses.

José Manuel Ribeiro, Mayor of Valongo, focused his intervention on the need to resist and avoid the fear that is emerging more strongly than ever from the current situation: on the one hand, cities and their inhabitants must resist physical, mental and democratic problems, but also previous problems such as inequalities, often ignored and now aggravated and unmanageable; on the other hand, fear, which no politician can manage, but which helps people to discern what is right (strengthening democracy, human dignity) from what must be fixed (permanent suspension of freedoms, market without limits).

Paola Pabón, Prefect of Pichincha, linked the discussion on democracy with the necessary debate on equality by addressing the challenge of the technological gap and how it affects social exclusion, in particular with the youngest. She pointed out that it was crucial to give more competence to local and regional governments, and to articulate sub-national levels of government so that they could carry out coherent policies. She pointed out the danger of defusing elections without meaningful agreements from all political actors, as this potentially weakens the voice of citizens.

Thembisile Nkadimeng, Mayor of Polokwane, President of SALGA and Co- President of UCLG, introduced the session by pointing out that it is important to change how we approach urban and regional governance to adapt to the challenges of the post-COVID-19 world by carrying out governance reforms that accelerate responses from the local level to global crises, socio-economic and political shocks.

"It is the task of the international system to recognize the difficulties we will face and to contribute to the transformation of the current international system into an inter-urban system that will take advantage of the strength of our territories and that can contribute, through dialogue between the spheres of government, to the next generation of multilateralism."

Amalinda Savirani of the Universitas Gadjah Mada (Indonesia) contributed to the conclusions by focusing on democracy at the local level, which is characterized by prioritizing the demands of citizens. She explained that, by ensuring that democracy works, the crisis opens a window of opportunity for local governments to strengthen themselves and make themselves heard at more levels, and pointed out that all the experiences presented in the session attest to these multiple opportunities. Finally, she pointed out that local democracy should not be subordinated to other priorities such as the economy, since without the former, growth can only be weak and vulnerable.

Lastly, Annika Silva-Leander, Head of Democracy Assessment and Political Analysis at International IDEA, stated that before the pandemic, the quality of democracy was already declining at the global level, including in the most advanced countries, and she regretted that the current situation is deepening this damage. Although often conceived at the national level, she explained that these restrictions are comparable at the local level. He noted that innovative practices based on technology and solidarity will bring citizens closer to local governments, allowing them to emerge stronger from this crisis.

The session collected opinions from many other experts and local elected officials, such as Octavi de la Varga (Secretary General of Metropolis), Elkin Velásquez (UN-Habitat Regional Representative for Latin America and the Caribbean), Johnny Araya (Mayor of San José and Co-President of UCLG), Carola Gunnarsson (Mayor of Sala and UCLG Vice-President for Europe), Paola Pabón (Prefect of Pichincha), Valérie Dumontet (Vice-President of Aude), Camilo Romero (former Governor of Nariño and winner of the 2019 IOPD Distinction "Best Practice in Citizen Participation", Imen Ouardani (Vice Mayor of Sousse), Edwin Miño (Executive Director of CONGOPE), Emilio Jatón (Mayor of Santa Fe), Shi Qi (Deputy Director of the Office of Foreign Affairs of the city of Xi'an) and Gennady Ryabov (President of the Public Chamber of the city of Nizhny Novgorod).