On may 27 the Swedish International Centre for Local Democracy (ICLD) and IOPD organised a panel discussion with local leaders in order to share their personal experiences with participatory budgeting (PB) in their cities. The speakers explained how they worked on the process to bring more people to decide over the municipal budget and how public funds should be spent in order to contribute for a more democratic engagement. The panel talk was moderated by Ana Maria Vargas, ICLD Research Director.

Iryna Skaliy Programme Officer of the Swedish Embassy in Ukraine introduced the drive for democracy policy: the principle to follow democratic values and to support democracy in all contexts. In Ukraine the drive for democracy is focused on combating corruption, ensuring the rule of law, supporting stronger public institutions, fighting for equal opportunities and economic growth. The decentralization was also an important reform implemented:  that meant to open equal opportunities to members and to realize their potential to build a better life in the community.

Oleksandr Syenkevych, Mayor of Mykolaiv (Ukraine) explained that they started implementing PB  in order to involve citizens in public life in a more democratic way. He underlined how important it was to visit other countries that already had implemented PBs. This gave him the inspiration to take the decision to present the PB in Ukraine. He also underlined how thanks to the PBs people started to understand their responsibility for what can happen in the city.

Anna-Carin Magnusson, Mayor of Nässjö (Sweden) explained that they started to implement participatory budgeting four years ago, and highlighted the engagement of young people, children and their parents. PB is an inspiring way to learn inclusion, citizenship and democracy for youth.

Peter Jansson, President of the city council of Åre (Sweden) talked about his experience when he was elected and he founded the Committee for municipality development. In this political context, he could find people who were inspired by the PBs as he was. In addition, the money available for PBs was also time-limited : it had to be spent before the end of 2020 so they had to make a decision quickly

Marc Serra, IOPD Secretary General and Barcelona Councillor, highlighted that in times of crisis, such as the pandemic, citizen participation must be preserved.   This was the main challenge of the implementation of PB  but not the only one : the profile of the participants in the PB was also a task to be faced. In fact, only middle-class people tended to participate and it was very difficult for immigrants to be involved, so Marc Serra explained how they have been working on that : they focused on communities of diverse origins in order to identify the projects they could have and encourage them to present the proposal. 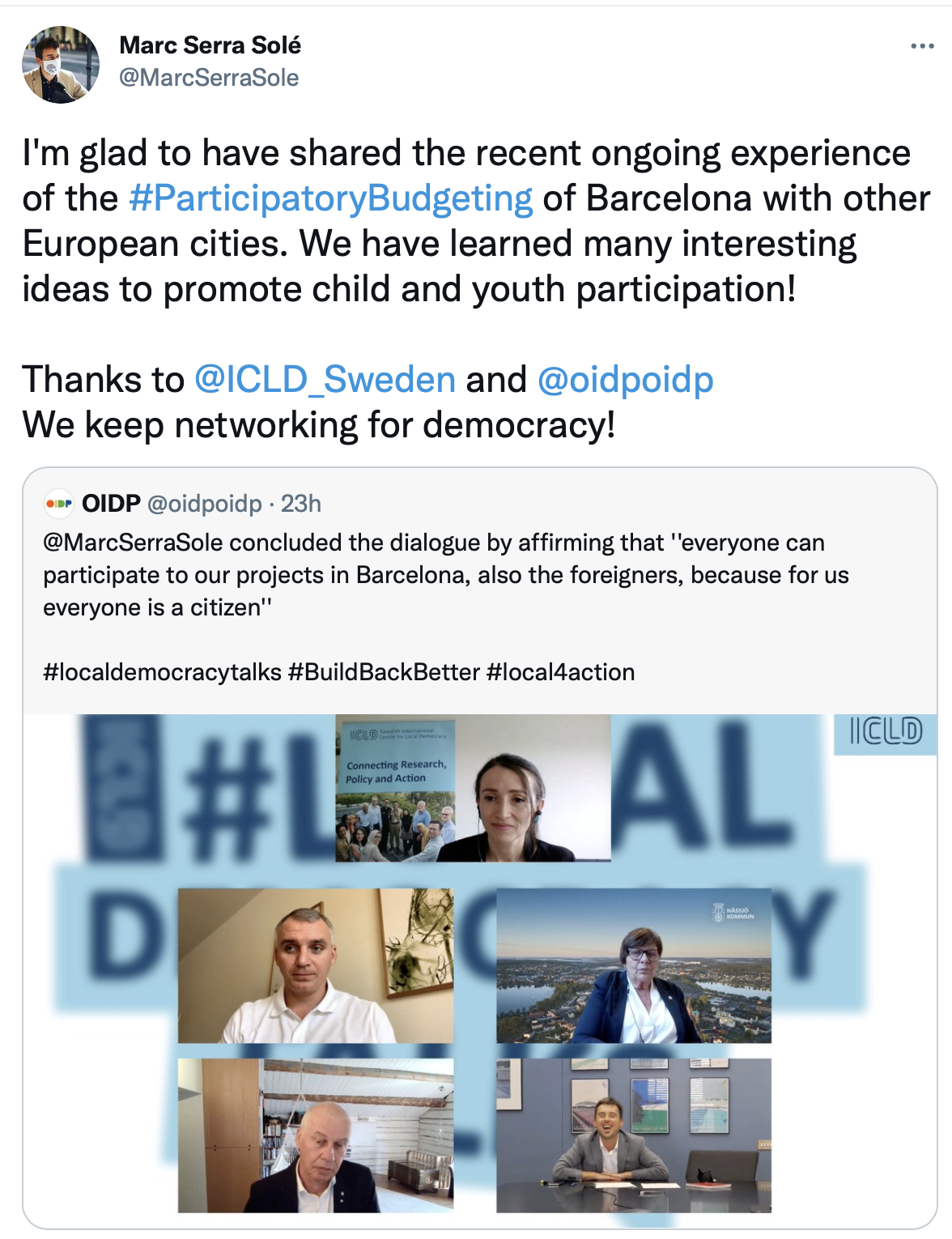