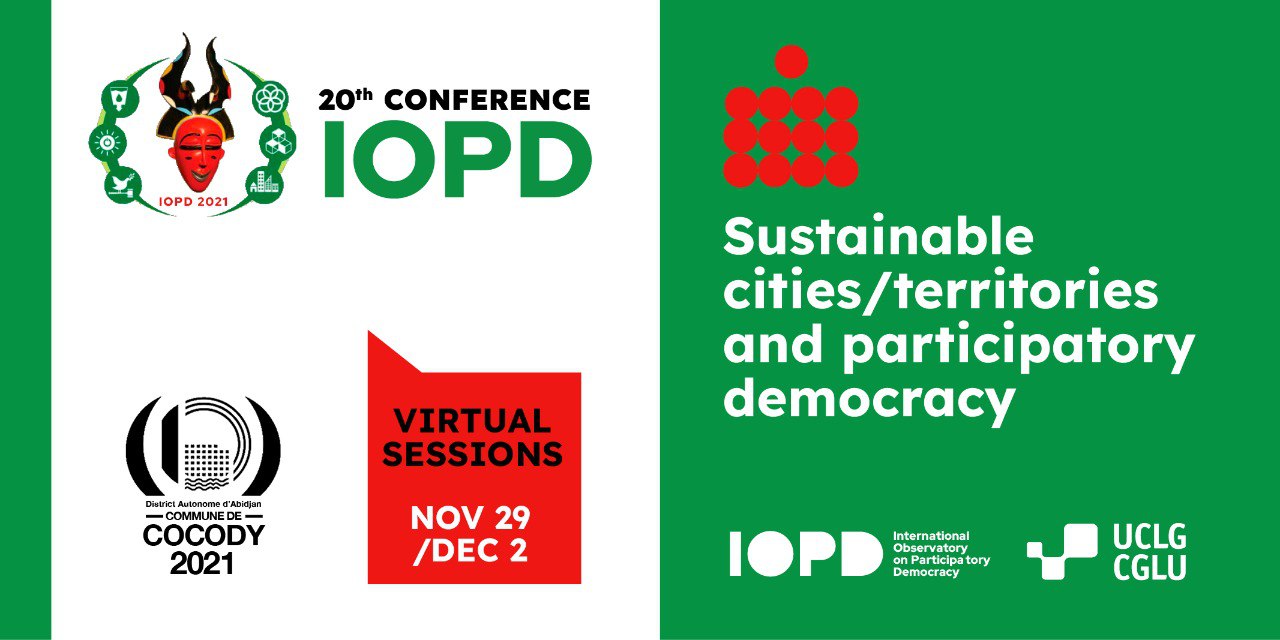 Back to Virtual sessions November 29 - December 2

The session on citizen participation in ecological transformation was held on November 29, 2021 as part of the virtual sessions of the 20th IOPD conference.

On November 29, the International Observatory on Participatory Democracy (IOPD) and United Cities and Local Governments (UCLG) organised a session on “the role of citizen participation in ecological transformation”, in the framework of the virtual sessions of the 20th IOPD conference. The session addressed how citizen participation is a lever for ecological transformation.

The panel started with the official opening of the virtual sessions of the conference by representatives from IOPD and UCLG. Nelly Ouassenan, Deputy Mayor of Cocody and IOPD president's representative, recalled the highlights of the Cocody conference and drew attention to the need and urgency to act and solve the climate crisis in order to preserve our planet. ‘’The theme of the session is at the heart of an issue that is itself a challenge: the involvement of people in resolving the crisis, which is economic, ecological and health-related’’ she said.

Emilia Saiz, Secretary General of UCLG, opened the debate by underlining the importance of the work of the IOPD and the relationship between the climate, democratic and health challenges. She noted the opportunity that the session offered to discuss ‘’how much of our ecological transformation will be done with communities and what role we all have to play in the ecological transformation’’.

Marc Serra, Councillor of Barcelona and Secretary General of the IOPD, contextualised the debate: ‘’the pandemic has the face of an economic and social crisis, but also that of a democratic crisis’’, and from IOPD ‘’we have the responsibility to give confidence in the maintenance of democracy’’.

The thematic panel was moderated by Emilia Saiz and Rodrigo Messias from UCLG's Ecological Transition team. The speakers were: José Manuel Ribeiro, mayor of Valongo, Peter Jansson, mayor of Åre, José Fajardo, councillor of Cuenca, Gilles Namur, councillor of Grenoble, Diego Leone, Secretary for environment and public space of the municipality of Rosario, Manuela Maunier, undersecretary for citizen participation of the government of the autonomous city of Buenos Aires, Maria Price, from the Swedish Council for the Promotion of Municipal Analyses, Florence N'Da Konan, CEO of Autres Possible, Daniel Mancebo, Head of Planning Rio de Janeiro, Christina Paci, Director of the Environmental Transition of Milan, and Daniela Amann, responsible for the Democratic Society network and dissemination.

José Manuel Ribeiro, a great defender of citizen participation in political and social life, presented the project of the construction of a park in his municipality and the involvement of the community in it. This project is ‘’the largest infrastructure of its kind in Portugal’’. He also presented the waste collection management project implemented in 2016, in which almost 30,000 people (a good participation rate) now collect their waste through this system. ‘’We can't be afraid to get people involved, more and more people need challenges, which are seen as dreams. We should put the word regeneration on our agenda’’ he concluded.

Peter Jansson, Mayor of Åre in Sweden, presented his vision for 2050: ‘’Together we want to create a sustainable future for all in a beautiful mountain environment’’. He presented a process whose main objective was to gather as many opinions as possible from citizens. ‘’We created a citizen dialogue to ask them what their dreams are for the municipality, and then we analysed their answers to find the gaps in the citizens' dreams’’. Once the vision and the 8 main points were drafted, the citizens were interviewed again to make sure that they identified with the new vision.

José Fajardo, presented the municipality of Cuenca, located in the Andes, in the Republic of Ecuador, of which 97.2% is rural and 2.8% is urban. In their public policy, a Territorial Development Plan has been drawn up with a vision towards 2030, which focuses on the care of nature, without neglecting the harmony between human beings and their need for production and their environment.

‘’It is important to guarantee the rights of nature, the sustainable use of land, to increase the resilience of the social sector and ecosystems by ensuring participation’’ he concluded.

Diego Leone presented Rosario's climate action plan: a cross-cutting plan developed by citizens. In his speech he said: ‘’We should not be afraid to listen to the citizens, we always try to reach a consensus with the citizens’’. He expressed his willingness to "invest more in climate change issues’’- bicycle paths, waste disposal, environmental programmes. He presented the system of district councils - representing the 6 districts in the city, balanced in terms of population and demographic diversity - which have specific agendas and discuss specific actions. Finally he concluded: ‘’we are doing our best to give our citizens the possibility to dialogue, in the work on territorial issues we are focusing on the execution of the territorial process, we are putting into practice local actions on climate change’’.

Manuela Maunier put forward a consistent concept: ecological transformation does not only come from the state, it belongs to the citizens. Indeed, she said: ‘’we need a social fabric, all the citizen collectives’’. She presented a project: a climate change mitigation platform created with citizens, academics and the private sector, all of whom are responding to the ecological transition. There is no single answer but it is a collective answer given by the different groups. ‘’No solution belongs to one sector, it belongs to all of us. Society needs to cooperate to develop ideas. If we do not work with citizens to create a virtuous circle, a space of proximity and representation, we cannot move forward’’. She also emphasised the importance of youth participation and involvement in driving change from the bottom up. 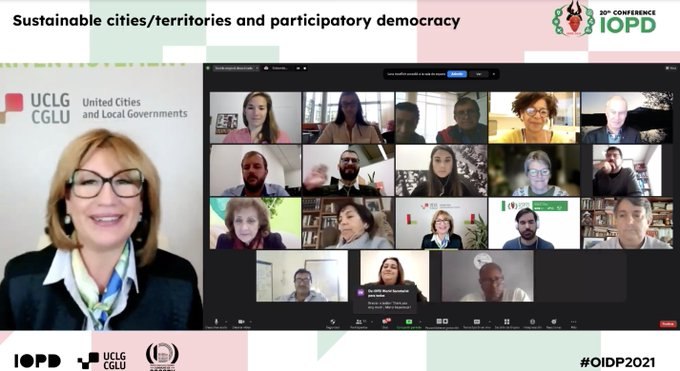 The second part of the debate was moderated by Rodrigo Messias who focused on how to encourage the participation of different communities and avoid intergenerational inequalities.

Maria Price introduced a presentation on data and statistics for benchmarking municipalities on sustainability factors (number of emission-free cars, bicycle lanes in each municipality, etc). She showed how the contribution to the Sustainable Development Goals (SDGs) would be achieved, explained the 50 indicators linked to several SDGs to encourage progress. Finally, she explained in which specific areas additional efforts are needed and what should be prioritised.

Gilles Namur presented the particularity of the geographical situation of the city of Grenoble which has to adapt to the climate. He communicated that within the municipal administration, there is an effort to green the city. They are carrying out studies to analyse what to plant and where to plant it. He presented planting suggestions to support family orchards and other greening initiatives. ‘’When we launch actions of citizenship, cooperation of institutions and citizens, we have many participants, especially young people’’. He also presented the city's greening projects through the "tree parliament", a forum for sharing information and understanding priorities.

Florence N'Da Konan, said that in her organisation Autres Possibles they talk about eco-transformation, sustainability and viability. ‘’Innovation matters and we want citizens and organisations to promote change and social innovation, in order to contribute to the eco-transition’’. She said that dialogue is needed to invite people to participate in consultations on decisions. ‘’Citizen participation is important, decision-makers must properly define their needs and the different stakeholders, they must be involved and consulted’’ she said.

She also appealed for no one to be left behind, in particular groups such as women and children. Monitoring and follow-up are also essential to show where the efforts have led. ‘’We, the citizens, must not only make the authorities smart, but also share and solve problems together, collective and scientific intelligence is relevant, it is an indispensable ingredient for social innovation in these difficult times and necessary for a win-win outcome’’.

Daniel Mancebo, presented the action plan for the sustainable development of the city of Rio de Janeiro, which focuses on two main points: translating the 2030 agenda in the city and carrying out a social transformation. The plan sees a good articulation of citizens on the construction of participation: 30,000 people support and 10,000 participate through the online platform. With this ‘’now we can analyse, tabulate and georeference the different needs of the different parts of the territory‘’. This experience received a special mention for the 2021 IOPD Award.

Christina Paci presented the Air and Climate Plan implemented in the city of Milan: a work that has seen the involvement and commitment of citizens in the ecological transition. She stated that: ‘’more than 50% of carbon emissions can be reduced, citizens and companies can reach this stage together, they are the main actors in the process’’. In the plan, developed with the collaboration of C40 and through extensive stakeholder and citizen consultations and over 12,000 online consultations, feedback was incorporated into the plan before its formal approval, now approved by the city council. The plan tracks residents' behaviours in order to positively change them to contribute to decarbonisation efforts; develops evidence-based policies; and enables citizen participation in energy efficiency and resilience through mapping of the most marginalised areas. This experience also received a special mention for the 2021 IOPD Award.

Daniela Amann noted that ‘’climate crises are an additional obstacle for democracy. These crises affect decision-making, and especially impact certain vulnerable and traditionally under-represented groups who are hardest hit by the climate challenge’’. She presented a project that involved 14 cities and aimed to examine the barriers to carbon neutrality - interviews and self-guided activities were used to develop a way of operating at scale - a democratic climate model. It demonstrated that four elements are essential to the project: diversity of methods, participatory actors, resourcing and subject matter expertise. ‘’Understanding climate change means designing and developing solutions with citizens that support them, but also developing funds to support the city administration. When we talk about citizen participation, we talk about methods, gathering and involvement, however it is important to identify the challenges, the local context and then choose your method to develop a better compass and not just a map of climate change through democratic society’’.

Rodrigo Messias highlighted the key elements of the debate: the importance of culture, not only as a means to change mentalities but also as a concept to explore diversity and make sure that participation is truly inclusive.

‘’The debate gave hope’’ revealed Secretary General Emilia Saiz. ‘’We can really engage. Transformation can be meaningful and we can ensure that the rights-based approach can prevail if we bring all voices together’’. She reported and pointed out the importance of feedback from citizens, the importance of taking into consideration different actors, young people, children, ‘’a very important part of the transformation equation’’. She also emphasised the significance of the link between democracy and governance processes for the changes that need to be achieved as well as for ensuring that some of the models that work are kept alive.

‘’There is therefore a clear link between the social contract and the pact for the future that we are proposing as a strategy for united cities and local governments and the work that the Observatory has done over the years’’, she concluded.

Finally, Adrià Duarte, coordinator of the IOPD, closed the session by ensuring monitoring and information sharing for transformative experiences and policies. Citizen participation will be key in changing our relationship with nature and securing intergenerational equity. 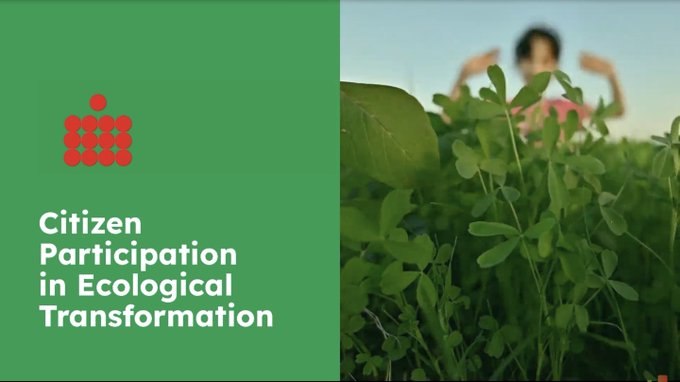